While this demand forecast is good news for our beleaguered Canadian oil and gas industry, it’s not good news for those concerned about climate change. 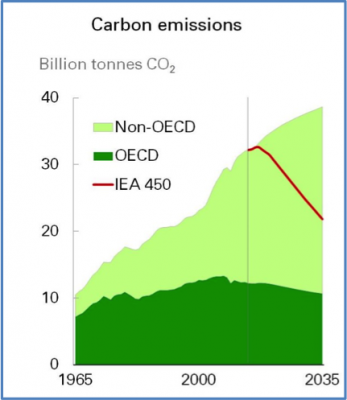 The BP report indicates that no matter how desirable a shift to renewables may be, there is a limit to the speed at which the shift away from fossil fuels will occur. Billions of people in the third world are increasing their per-capita energy consumption as illustrated through a dramatic increase in Non-OECD carbon emissions at right. That energy consumption increase is overwhelming all efforts by the people of the first world to become more energy efficient and use more renewables to combat climate change as illustrated through a modest reduction in OECD carbon emissions at right. This trend of net increasing energy consumption is likely to continue for at least a generation.

I’m all in favor of reducing energy consumption per capita, using energy more efficiently and relying on more renewables for energy production. These worthwhile goals require billions of people to make lifestyle changes that most have shown great reluctance to make. These lifestyle changes include:

I think the BP Energy Outlook report says we’re making small progress, as a planet, to address the adverse impacts of fossil fuels that include climate change and pollution. We’ve managed to decrease in the rate of energy consumption growth as illustrated below. It’s difficult to conceive of a more rapid transition without consumer willingness to accept: 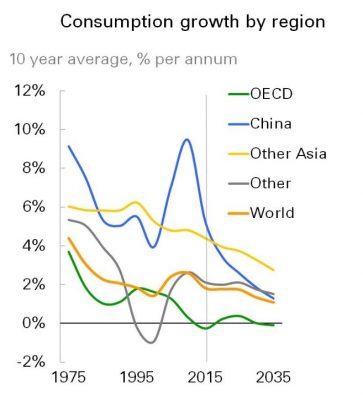 The reality is that the projected demand for oil as a transportation fuel will outstrip the projected increases in alternatives such as the use of public transportation, natural gas as a fuel and efficiency improvements as shown below left. This demand for oil will be driven by a global vehicle fleet that will more than double in size during the next 20 years as shown below right. 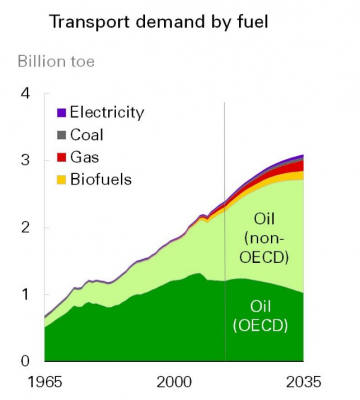 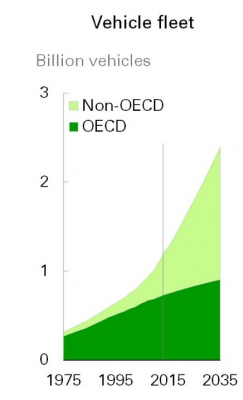 Increasing Use of Renewables

I’m excited by the forecasters repeatedly under-estimating the amount of renewable power that will become available as illustrated below. If that trend continues the use of renewables will surpass 10% of total energy usage by 2035. 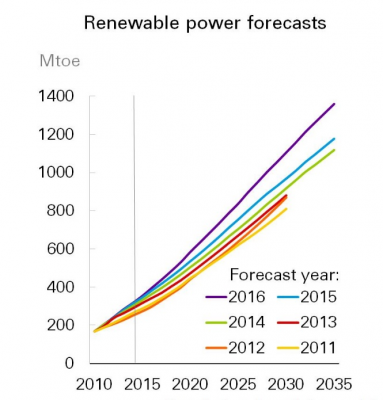 Can you share your ideas for how we can reduce our consumption of fossil fuels and thereby reduce their environmental impact? For more information visit BP Energy’s Statistical Review of World Energy