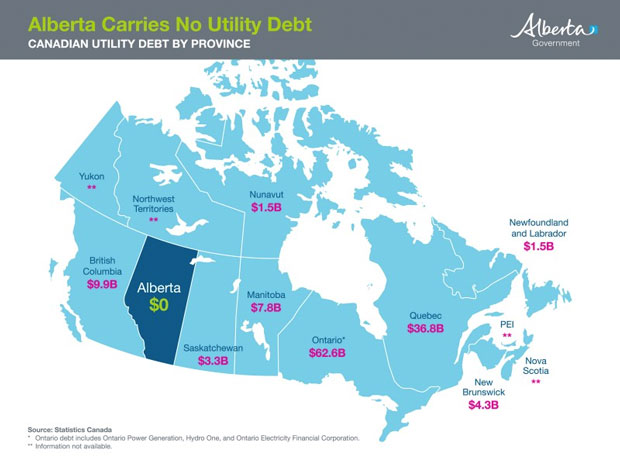 Alberta is the envy of the other Canadian provinces because it has no electrical utility debt. Most other provinces have chosen to burden future generations with debt and interest payments so that the current generation can enjoy below-market electricity rates. The billions of dollars of indebtedness are shown on the map.

Alberta’s enviable position is now at risk as the NDP government proposes an early phase-out of coal-fired electricity generation by 2030. That’s because an early phase-out will require compensation be paid to the owners of the generating stations. That compensation will create provincial utility debt as shown for other provinces on the map. Remember, we’re running annual provincial deficits. We don’t have a surplus we could use to pay the compensation.

It’s not surprising that some of the reaction to the NDP government proposal was quite negative: Early shutdown of coal-fired power plants could cost billions of dollars: analyst.

How much are you willing to pay to accelerate the coal-fired electricity generation? I believe that most Albertans want coal phased out as a CBC poll suggests. However, I also believe that most Albertans answering these polls are making the assumption the phase out will not add to their personal electricity bill. What’s missing from these polls is a question like: By how much are you willing to increase your monthly electrical bill to phase out the use of coal early as the NDP government proposes? My experience is that support dwindles rapidly for even modest proposed increases in monthly electrical bills. The comments posted at the CBC article make the same point.

This list of electrical generating stations in Alberta shows that most new stations are using or planning to use a fuel other than coal. Given this sensible trend coupled with the record low price of natural gas, is there any significant additional environmental benefit in the NDP government intervening to accelerate the phase out of coal?

The NDP government sensibly revised the NDP campaign pledge on crown oil and gas royalties. Let’s hope it does the same on the proposed early phase-out of coal-fired electricity generation.