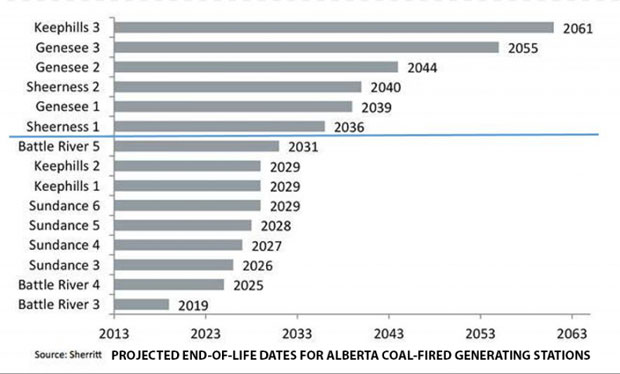 How much of a financial burden could the early phase-out of coal inflict on cost-conscious Alberta industry and consumers? While no consensus exists given the wide range of cost estimates for decommissioning coal-fired generating stations early, every estimate includes the scary word billions.

Terry Boston, the retired head of North American’s largest power grid, has been appointed by Alberta’s NDP government to provide alternatives for phasing out coal. Mr. Boston will focus his attention on the top six of Alberta’s coal-fired generating stations, as shown on the chart above. These six generating stations had been expected to continue operating past 2030.

Apparently, the zero cost alternative of simply operating these generating stations to the end of their useful life is off the table. Here are the remaining alternatives that Mr. Boston will undoubtedly consider. As you will see, the final recommendation will hugely influence the total cost, to consumers, of phasing out coal. I’ve listed the alternatives in increasing order of cost and risk to consumers.

The economics of the conversion depend on a number of factors such as the size and age of the coal-fired generating station, its boiler technology and the price of natural gas. On the last point, the timing of the conversions couldn’t better for the Alberta government and for consumers.

Such conversions are occurring in growing numbers in the U.S. That experience means the risk of cost overrun or technology failure of conversions is low. The conversions ensure that the remaining useful life of generating station is utilized for the benefit of the owner and the electricity consumer.

An immediate benefit of conversions is that they provide an additional sales opportunity to our beleaguered Alberta gas industry.

Sadly, some would have us believe that clean coal is an oxymoron. However, there are a number of technologies that reduce the pollution and greenhouse gas impacts of burning coal.

While all of these technologies will cost millions to implement, they can reduce the adverse impacts of coal to the level for natural gas. Limited experience with these technologies means the risk of cost overrun or technology failure of every implementation is significant.

Implementing one or more clean coal technologies ensures that the remaining useful life of generating station is utilized for the benefit of the owner and the electricity consumer. Huge advantages of this alternative include:

The NDP government could elect to simply buy the remaining six coal-fired generating stations from their current owners and decommission them.

This alternative feels scary because it:

Alternatives that meet the NDP government’s stated pollution and greenhouse gas reduction goals don’t have to cost billions. Conversely, abandoning coal-fired generating stations before the end of their useful remaining life will cost electricity consumer billions for a modest benefit. That course of action is unwise and unnecessary.